We use quite a few different finishes; some we love and some we don’t (but they get used because they perform a certain function). They all have their own unique properties and all have drawbacks or limitations. Most woodworkers have their favourites and any discussion on the various merits of one over another can get quite heated. So we’ll bravely join the argument with our opinions:

There are a bunch of different varnishes; you can get water based, oil based, polyurethane, etc. They all have one thing in common though; they form a definite, visible coating that offers a level of physical protection to the surface. They can be brush or spray painted on; spray is good because of the nice, even coat you get but it is quite wasteful.

We are not great fans but we do use varnish occasionally. Any surface that has to be really resistant to water (like table tops) gets varnished. The problem with varnish is that you lose that natural timber look and feel; it is also not much good outdoors and where oiled timber just gets a nice, grey patina – varnish starts to peel and just looks horrible.

Also known as Flaxseed Oil and is available in several different ‘forms’. We prefer Boiled Linseed Oil; it has some additives that allow it to dry faster (handy) and dilutes well with Mineral Turpentine (50/50) to allow use in a spray gun. That dilution also means the oil will penetrate into the timber before it drys; this is in contrast to a varnish (for example) which drys as a coating on the timber. 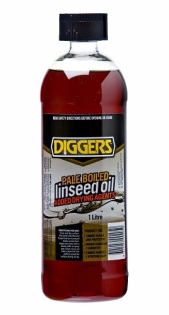 We use it a lot for several reasons: it smells nice, it drys quickly, can be used with a spray gun, is edible (or at least inert to humans) and, most importantly, is comparatively cheap. That’s not to say we are cheap skates when it comes to finishes but you get a lot of wastage when using a spray gun; if we were to substitute Linseed Oil for something like Tung Oil it would add significantly to the overall cost.

If rubbing it on we use it straight and if we use it in a spray gun it gets diluted 1:1. Just leave it for a while after application – a while is anywhere from 15 minutes to a couple of hours. The time doesn’t seem to matter much as any excess just goes a bit sticky – but you just buff it off and it’s fine. After the excess is buffed off it’s good to leave it a while to fully set – once again, time is not that critical. The product can be left as is; the finish is not gloss (we don’t like gloss much) but it does have a nice light sheen.

The finish is not impervious to water (or anything else much actually) but it does offer some protection due to the fact the oil soaks into the wood – it keeps that surface substrate slightly moist – which is good. You can add another coat (or two) but you reach a point of diminishing returns – that is, each additional coat will give smaller and smaller benefits. One coat is good, two is OK but more than that doesn’t really achieve much.

I always like to complete with a beeswax polish – more on that later.

We love Tung Oil; just beautiful to use, smells great, no known allergic reactions (inert to humans), sets completely flat (no shine at all) and is the perfect accompaniment to our beeswax finish. It has been around since the Chinese discovered it in about 400BC and is made by pressing the seeds from the Tung Tree (there’s a shock). It reacts with air to harden but also, like Linseed Oil, penetrates the surface of the wood to give it a bit of protection. 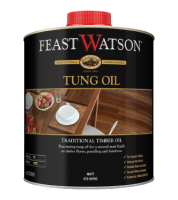 It is claimed to be water repellent but from our experience that is dubious; it certainly helps but it’s not like a coating of polyurethane or some of the outdoor varnishes. Maybe if you used enough coats it would form a reasonable barrier but for indoor furniture and such there is really no need. All the hand tools used in our workshop have Tung Oil applied to the wooden handles, it is tough but has a very natural feel.

It does have one major drawback though – cost. It is expensive; used as a rubbing oil is not so bad but forget using it in a spray gun. Generally we will use two coats; the first is diluted 1:1 with Mineral Turpentine and the second straight. Then finish with our natural beeswax polish – hard to beat.

Danish Oil or Scandinavian Oil, as it is sometime called, is a blended oil. It can contain Linseed or Tung Oil as the base but has other stuff added – like varnishes or hardeners, etc. It is nice to use and gives a good finish especially for indoor furniture; it has a light sheen and smells OK. It has a couple of down sides though; it is quite expensive and it is hard to find out exactly what’s in it and for that reason it is a little risky using on anything that will be in contact with food. 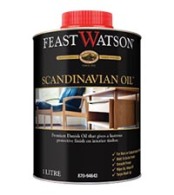 Having said that it is still the oil of choice for some of our furniture items; anything that may need a bit more protection. You can put several coats on over a period of time and it builds up a more protective surface – the jury is still out on whether it is actually better than using several coats of Tung Oil though.

This one we use straight; no dilution required and we still like to finish with our natural beeswax polish.

All our natural timber gets finished with beeswax polish; it’s great to use, smells delicious, gives a nice light sheen and is relatively cheap. It is generally applied once the timber has been oiled although it is possible to put it straight onto raw timber. The disadvantage of doing this though is that the beeswax doesn’t penetrate very far into the wood – hence the use of a penetrating oil first.

To apply you just smear it on with a rag (or your hand), leave it for a while and then give it a good buffing. We make our own; you can buy some of ours or buy a commercial product or make your own – I’ve set out our recipe below for those who are keen.

The beeswax can be bought in 1 kilogram blocks from Ebay – but you can’t use it ‘as is’ because it is like rock, so it must be combined with something else to soften it. We use white mineral oil for that (Ebay again); it is cheap and, like the beeswax, completely inert to humans (great for using on anything used for food preparation).

The ratio of beeswax to mineral oil is 1 to 4; this is not exact – the more oil the softer the resulting compound so in a warm environment you may want to reduce that ratio. Some techniques on the Internet melt the beeswax using a pot over boiling water – it’s OK but takes forever – a microwave is much faster and just as easy to control.

Grate the beeswax using a cheese grater and put it in a bowl and in the microwave for a minute; important that you melt the beeswax in small increments (30 seconds to a minute each time) giving it a stir regularly until it is nice and clear (it will be hot so take care). Then add the mineral oil and stir until it’s all mixed – should still be very clear and ‘liquidy’ at this point. Pour into jars and leave to cool; it will slowly solidify and should be firm but soft enough to spread (bit like that soft spreading butter straight from the fridge).

There you have it – simple and cheap recipe for beeswax polish.